Photo books are becoming very popular amongst members of our club. Gary Allkins has recently shown us two examples of his work during the breaks in our club meetings.

Gary often gets up in the very early hours to travel to venues to take photos as the sun rises. He has included many of his great photos in a photo book he has titled, "Stupid o'Clock".

Tonight we enjoyed "Little Photo Trips Into Birmingham". This 200 page book made us want to look again at places in the city that we have not given a second glance before. 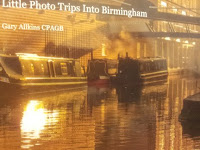 (Apologies to Gary - the pic above was snapped with a camera phone in poor light!)
Gary and his pal go to Birmingham when they have no other weekend photography planned. Unlike his "Stupid  o' Clock" journeys,  these trips only last a couple of hours. They are an opportunity to discuss what is topical in the world of photography and to experiment with different types of camera. To date he has used film cameras loaded with black and white film, compact cameras, old film lenses ...... The majority of the images in his latest book, however, were taken with a Canon G12.
The photo books are a great way of sharing lots of photos and records of holiday adventures. I spotted that a new club member had a photo book of a trip to Ethiopia that he was showing to Jean. Last year Margaret  had a book printed of photos she had taken of a family card collection. She had accompanied each image with notes on her family history. Perhaps she will bring it in for another club meeting?
Gary uses Blurb to print his books and so far has not been disappointed with the quality. More info here - BLURB.   Have other club members got more sites to recommend?
﻿
﻿
Posted by Aldridge Photographic Society at 23:29