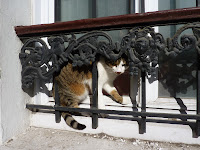 The hot trek up to Montmartre was making our legs ache. We had stopped to rest on a little ledge when we heard  plaintive mewing. A young Chinese girl had heard the sound too and she was waving her arms in front of a window that had an ornate rail in front of it. We saw that she was trying to coax a cat from behind the railing but it appeared to be trapped. Soon a group of five or six people were gathered around the window.  Each took a turn at trying to lift the cat. There was much animated discussion and gesticulating as the little crowd spoke different languages.
Finally a young gallant stepped forward. With the help of another young man who pushed his hands through the bottom of the railing to give the cat extra lift,  he pulled the cat free of the railing. The applause died quickly as the cat immediately scrambled back behind the railing. The shocked group dispersed without another word. I thought the prisoner was worth a photo!
Joy
Posted by Aldridge Photographic Society at 15:10